Note : this article will be constantly updated with new fake label I receive time to time from my fellow collectors and myself. Last update : Fri Dec 11 2015.

Many fake valuable printed material is sold through Ebay and on the internet in general simply because you don’t actually hold in your hands what you are buying, so it’s easy to defraud the buyer. Unfortunately it’s difficult to report such illegal abuse because Ebay make money of it. They don't care whether an item is a copy or an original as long as it’s sold through their platform. I’ve seen many designers or photographers complaining because a large amount of copies and illegal use of their creations are sold on Ebay or Amazon.

Now let’s talk about what I myself experienced, buying fake hotel labels. The following images are all scans of fake hotel labels I bought from Ebay. Plaese note these were stated by the seller as ‘100% original’. Please have a thorough look at them (click them for a larger view). What are those lines and dots ? You should ask yourself. Aren’t these supposed to be lithography prints ? Well…yes ! Supposedly. See below the explanation. 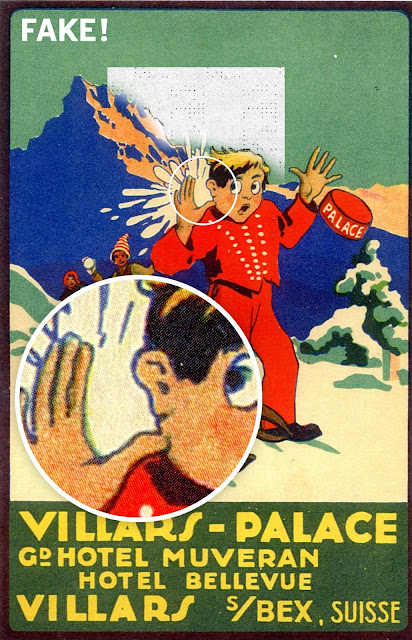 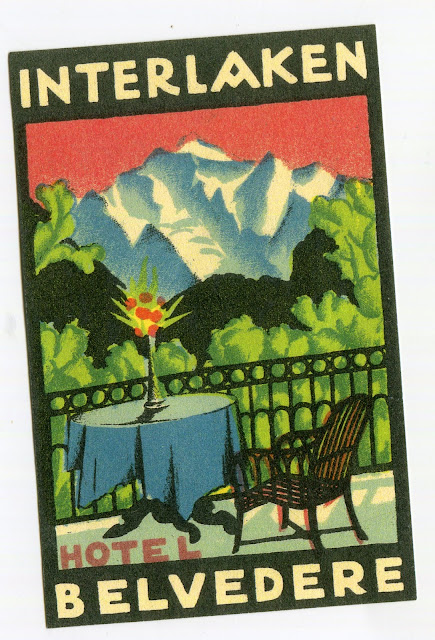 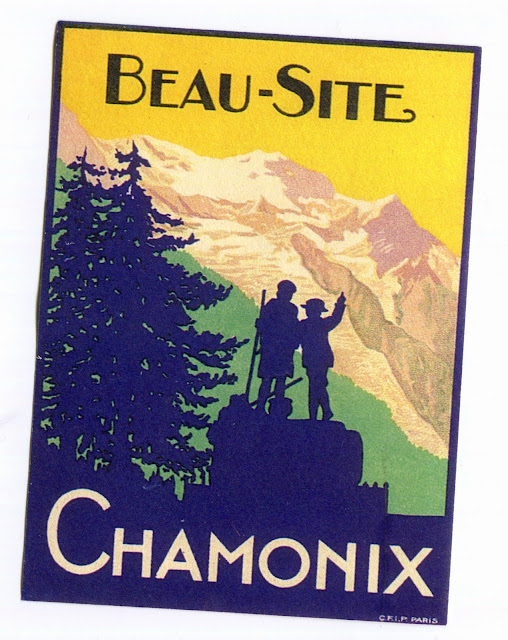 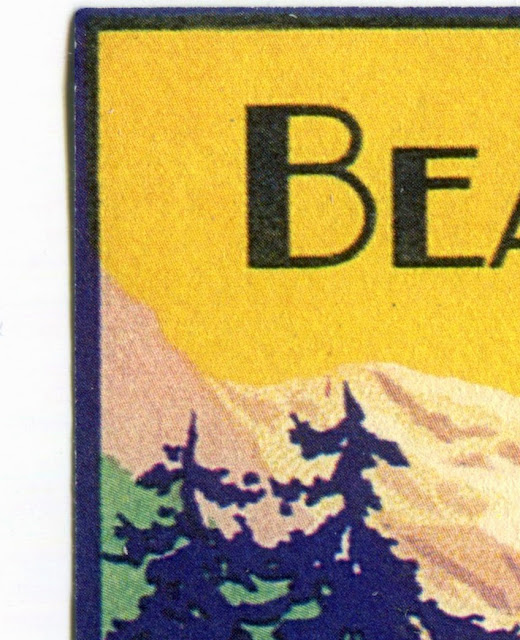 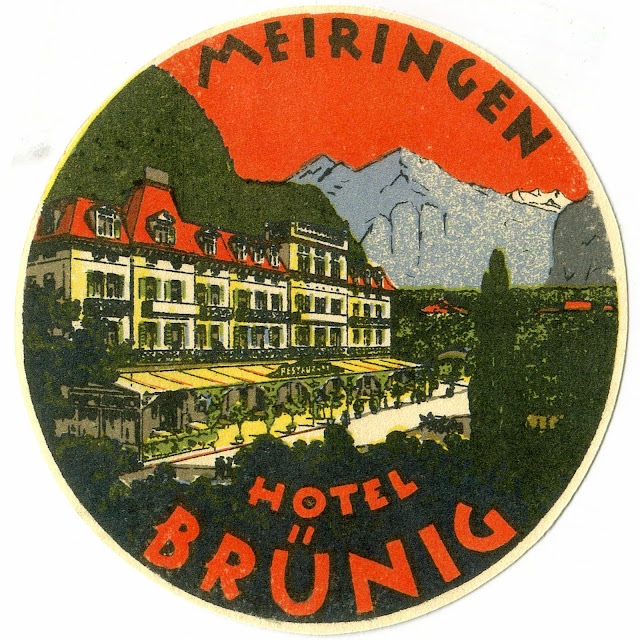 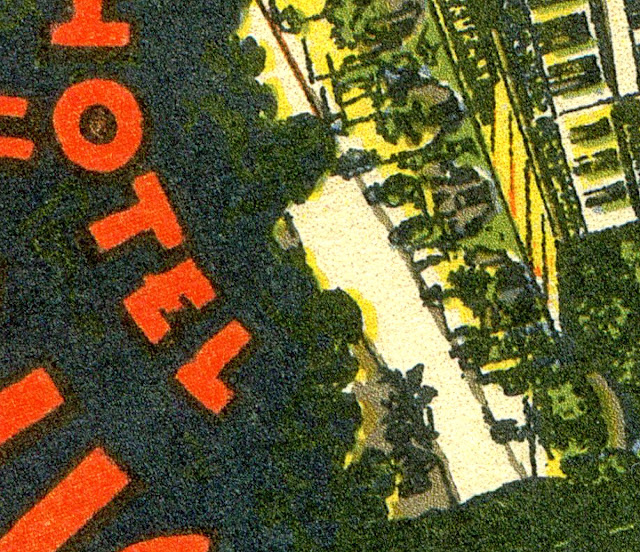 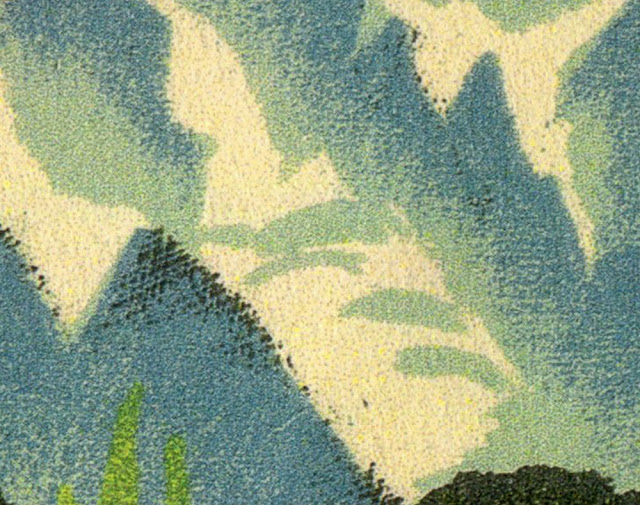 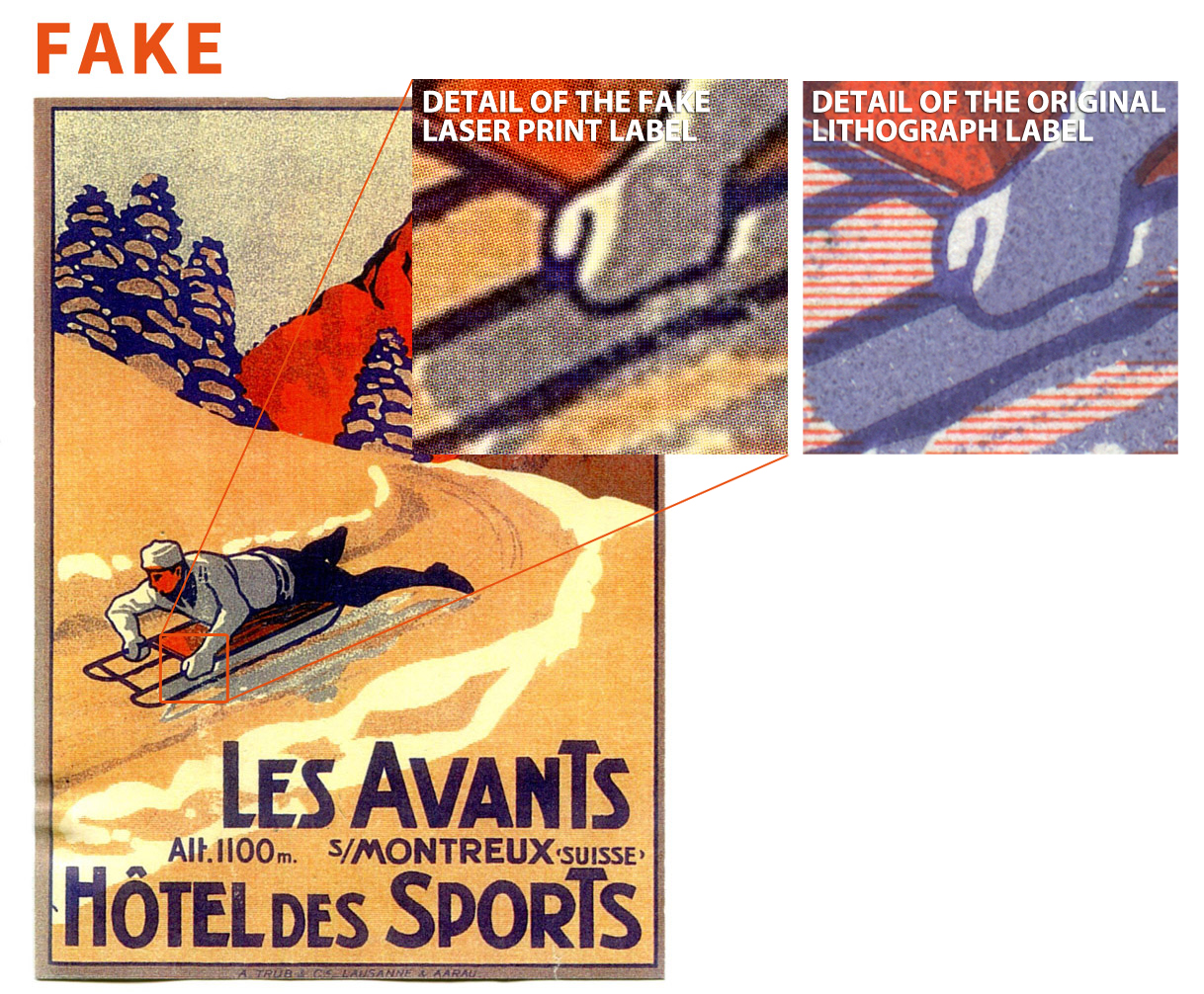 Below new additions Fri Dec 11 2015. Thanks to Tom Schifanella for the contribution ! 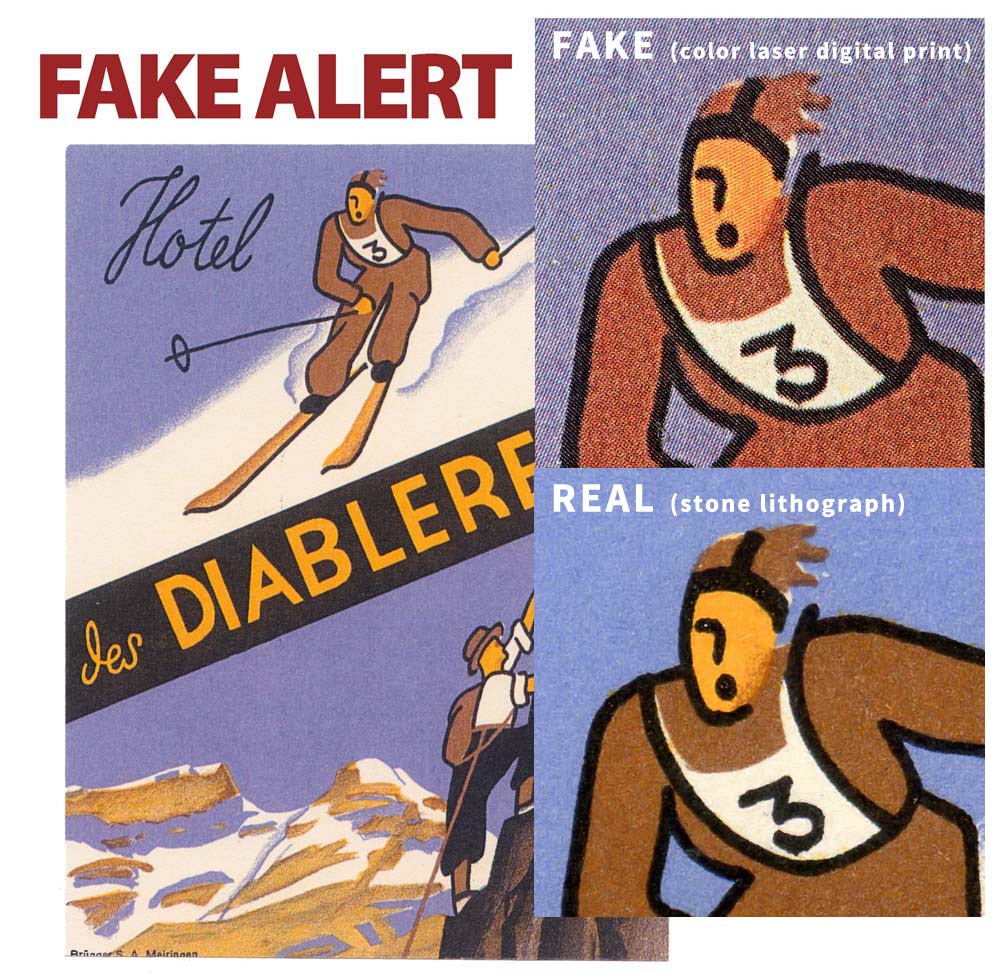 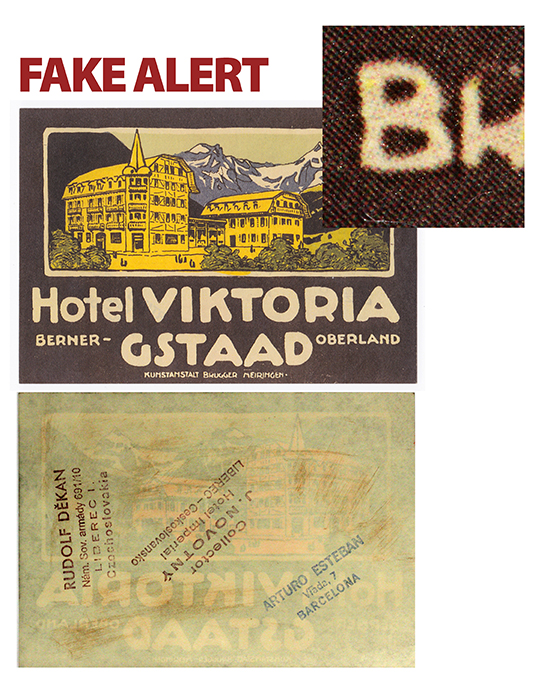 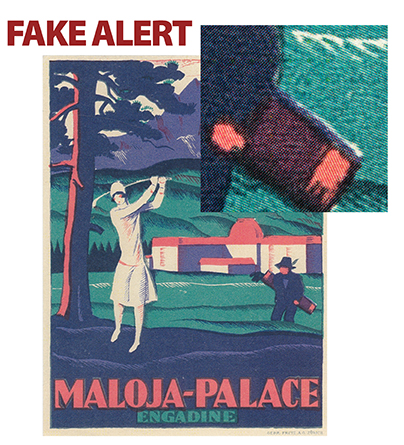 The 8 signs that indicate your label is fake

Requirements : a magnifier or a scanner, your sharp eyes and a good sense of smell !

1)  Tracking dots. These fake labels have all been printed using a color laser printer, you can see that in bright and dark areas where appears a grid of yellow dots, called 'tracking dots' (more info) : see X-ray image above the doorman’s head in first image, used by all manufacturers to identify a printer. Even if a small amount of laser printers don’t have tracking dots, they still print a pattern.
2)  Pattern. There is oblique lines pattern made by LED laser heads of the printer.

3)  Color. Digital printing uses CMYK (Cyan, Magenta, Yellow, Black) colors and create a dot pattern with these colors which is perceived by our eyes as an homogeneous colored surface, lithography makes flat colors not CMYK patterns, this pattern can easily be seen in all fake labels with a sharp eye or magnifier.

4)  Surface finish. Toner ink used by printers leaves an even shiny surface, even on a matte paper.

5)  Smell. A real label has an inimitable and authentic 'old' paper smell which just can't be copied.

6)  Cut. Round Brunig label has been cut by hand using a cutter and not with an industrial plotter.

7)  Stamps. Real stamps have been made by the forger for the exclusive use on fake labels. These are sometimes used on reverse of the labels (see scan above). The stamps were originally used by collectors to identify their labels. You can’t rely on this to know if a label is fake or not because the forger uses a real stamp.

Below is a scan of a lithography versus offset print (click for larger version). All the printers will generate a pattern to recreate the colors, even an inkjet printer. Stone lithography, however, is an antique technique that makes single colors layers overprinted (see my older article!). Each layer is printed with a lithographic flat stone, which is directly engraved by the artist using a special tool. The stones are inked and used as stamps to print each color layer of the composition. These layers can go up to five, meaning five stones have to be engraved to print the artwork. Some collectors and specialists even compare lithography to a real painting because of its accuracy. Learn more here. 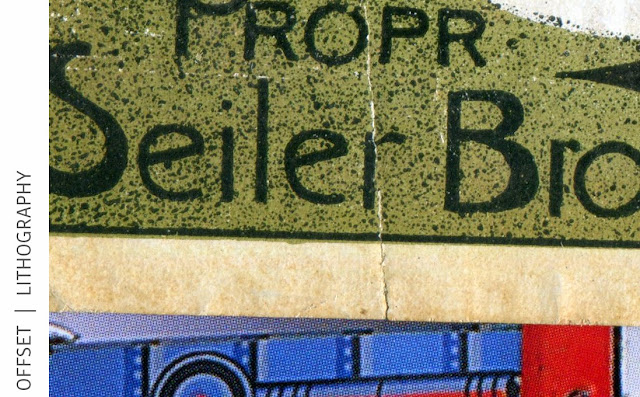 Above is an example of lithography at its early stage, around 1890 - 1900, while below is a more 'recent' example of lithography from around 1940 -1950. With the hand lithograph technique, the artist creates ALL his patterns by hand, leaving a random agglomeration of tiny dots when seen under a magnifier, but give the effect of an additional homogeneous hue when seen by the naked eye. The offset lithograph technique, however, was a mechanical process developed later that allowed to separate original artwork colors in 4 different layers and created a dot pattern in some areas. When each layers are over-printed, they gave the illusion of new colors in the artwork. The dots in these mechanically-generated patterns are strictly regular and well-aligned. See this Bellevue label below in which a mix of flat colors (like the red text and the sky) and offset pattern hues (trees, rocks and snow… see detail below) have been printed. Another good explanation on the subject can be found here. 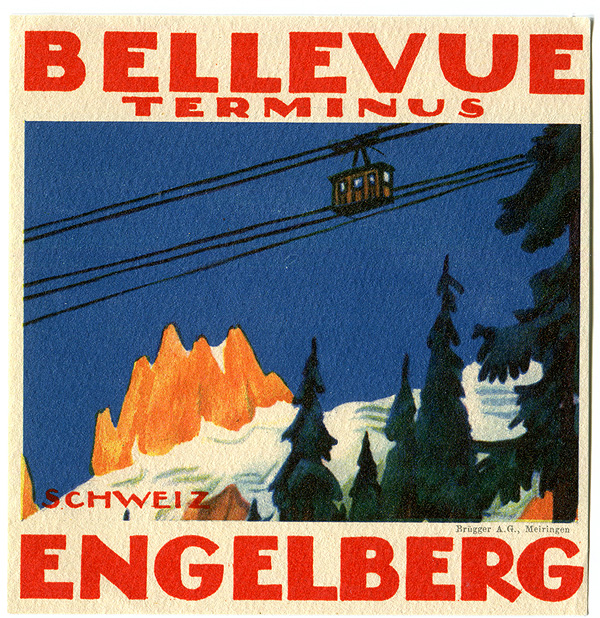 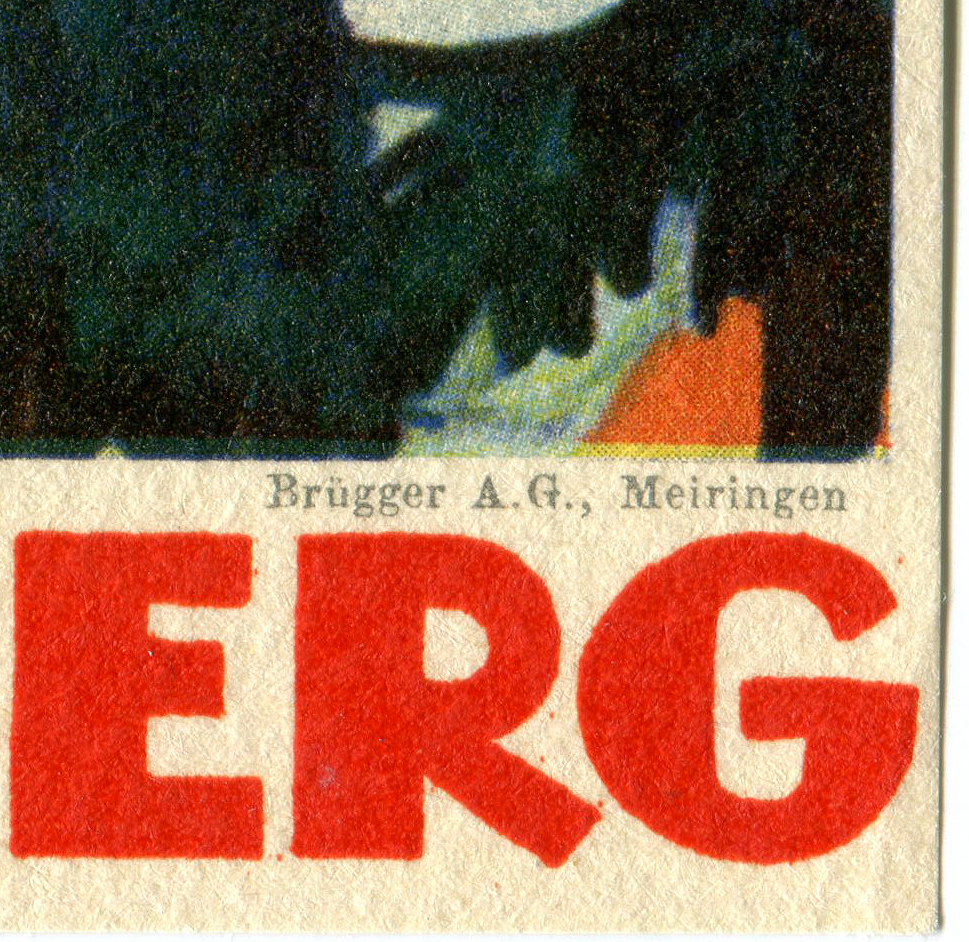 **EDIT** (August 5th, 2015) : Here's a recent FAKE label I received. That is ANOTHER KIND OF FORGERY TECHNIQUE which is ink-jet printing AND an attempt to give an 'antique' and glossy finish effect which resulted in a disgusting dirt and soil effect. The real label is a custom cruciform die-cut label that has been imitated here by hand using a cutter knife. Buying a manual die-cut machine and make custom dies would be the only option to imitate the cut but would cost waaay too much money and effort to the forgerer. See below the REAL ONE (in its squared, non-cruciform version) VS the FAKE ONE (click for a larger version). The second image shows the FAKE one in its entirety. WELL TRIED ! 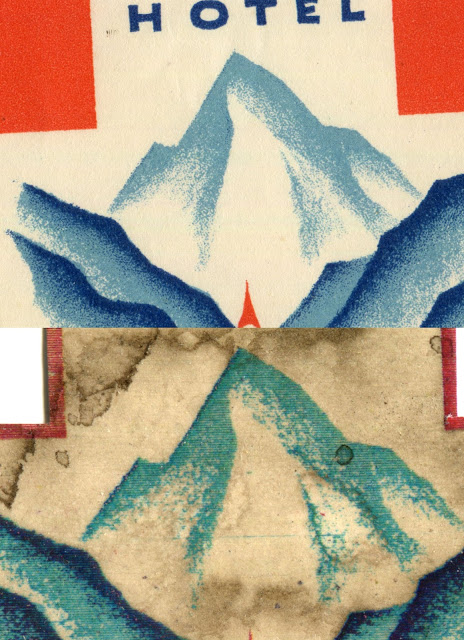 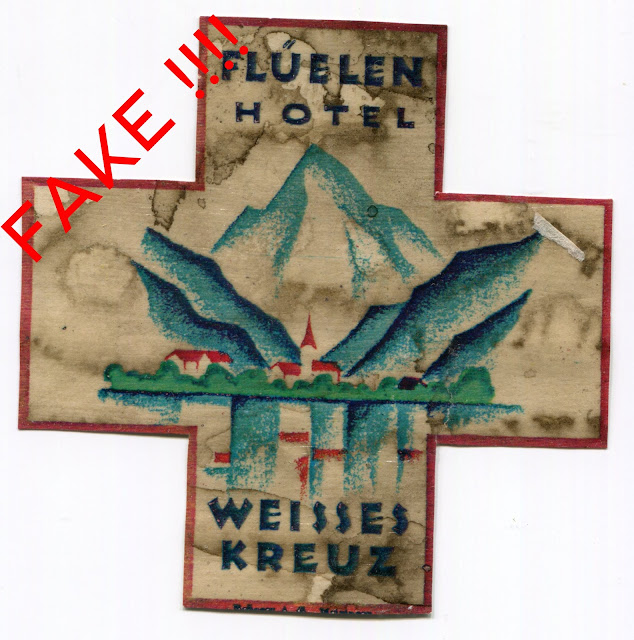 The successive steps of lithography from a hotel label
Posted by frank at 1:20 PM No comments:

Email ThisBlogThis!Share to TwitterShare to FacebookShare to Pinterest
Labels: label, The successive STEPS of lithographY printing from a hotel label luggage 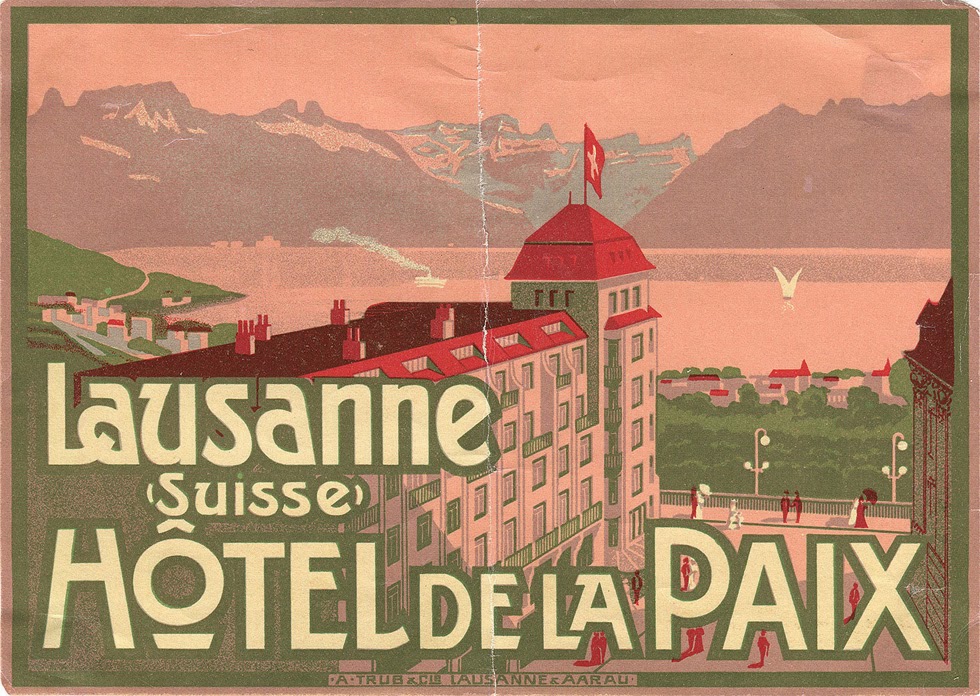 is rare typography, art, design, books… everything from my paper stack. Have a look at my Flickr, too.